Update to a post I made back in October 2015! So yeah. My husband and I decided to invest in the new Glowforge laser, as part of the highly discounted crowdfunding campaign. We knew it wasn’t ready to ship, but decided that it was worth waiting for (a) because of the features, and (b) because decent lasers were mostly waaaay out of our budget, and (c) we were in the process of moving to France and didn’t know when we’d have a place for it anyway. Then as the months rolled by, the company discovered that they weren’t as far along with the development as they thought either. Cue lots of projected finish dates that were missed, I think at least three major ones. Finally though, last fall they started shipping production machines, first to US backers, then to international backers.

We got ours (in France) a month ago, well over two years after we purchased. Can I just say, that it is great to *finally* have the machine, and to have it work so amazingly well (as was promised all along)? Behold! 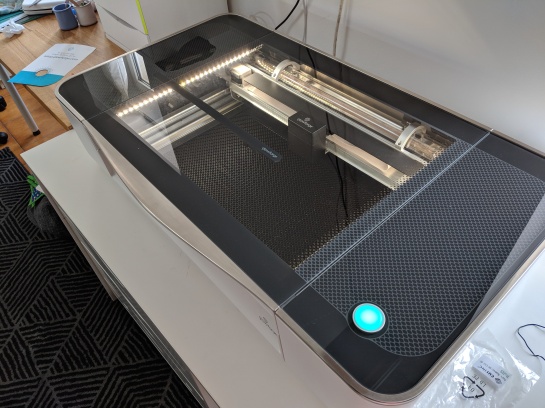 It is WAY BIGGER in person that you think from pictures. Even though I knew the specs I was a little shocked. Notice too our window venting setup. Our windows are a meter and a half tall, and open inward. The simple venting setup that most of the US users are able to do was not possible here, which is part of why we haven’t used the machine as much as we wanted to since getting it – it took us a while to figure out a solution.

Maker:L,Date:2017-9-19,Ver:5,Lens:Kan03,Act:Kan02,E-Y
First test! I took a rubber stamp I had carved, made an impression on a piece of paper, stuck it in the laser bed, took a scan with the camera in the laser’s lid, and then etched it in some of the wood called ‘Proofgrade™’ that the Glowforge company developed. Seriously, it’s amazing. It is pre-finished, has a mask laser so the soot and overburn from the heat of the laser don’t mar the surface (you peel it off after) and has a barcode that the machine recognizes so you don’t even have to input any settings, if you don’t want to. SO SIMPLE. They don’t have a distribution center of Proofgrade in Europe yet, but they’re working on it. I can’t wait! But really…other than needing a computer connected to wifi to hit ‘print’…I didn’t need any kind of design software to do this test. Pretty wild.

Did an experiment with cork to see how it worked. I colored it with sharpies afterward. Ikea placemats ftw! Which I just noticed they aren’t selling anymore. Blast.

I made a memory game of letter characters from scripts around the world. The cards turned out so well! Because I could, I picked characters that made specific sounds, to spell out the names of everyone in my family. The name of each script is on the bottom left, and the sound the letter makes is on the bottom right.

But one of the coolest things about this machine is that you can make more than just pretty things, you can make FUNCTIONAL things. Like this ‘stopgap’ for the dumb hole between the table and my son’s high chair. He’s still working on picking up foods, and squishy/slimy ones are particularly difficult…and nearly always ended up on the floor from going through this hole. I’m not patient enough of an engineer to get everything perfect the first time, but several iterations with cardboard later, I found a solution that works and better yet is easy to clean! And so far my son hasn’t figured out how to take it off, ha.

SO: my recommendation? If you have enough funds for it, GET IT. If you’re a hobbyist, an artist, a tinkerer, retired, have a small creative business, this is a great tool. If you’re an inventor it’s great too. If you want to make thousands of one thing to sell, you’d probably be better off elsewhere. One thing I do have to also promote is the Glowforge community on the forum. I was a pretty involved member for the first two years (basically until my son was born, after which I had no energy and/or brain cells left for anything else) and it is a great place to learn and ask questions and have silly conversations. I know for certain that it’s the only reason quite a few people were able to stick out the long wait!

*One note for international buyers… if you’re in Europe, Switzerland, or the UK, it might take a bit longer than the continental US but you’ll get your machines fairly quickly. Those initial backers in Canada, Australia and Singapore are still waiting for the certifications to be approved, and are looking at estimated times of getting their machines in November, a full three years after they purchased. They aren’t happy. But here’s hoping the certs will come through sooner rather than later…